In this thesis, we experimentally study the interaction of liquid tin microdroplets with a nanosecond-long Nd:YAG laser pulse. Our study focuses mainly on the underlying fluid dynamics that drives the thinning, fragmentation, and mass redistribution of the liquid target. In Chapter 2, we experimentally obtain the thickness of a target sheet by two independent methods from which we derive the mass content on the sheet. The results reveal a thickness of just several tens of nanometers for the sheet. We find a self-similar behavior of the thinning process, and we generalize the thickness profile in a model which allows a prediction of the thickness for a broad range of experimental conditions beyond those used in this Chapter. From the sheet thickness, we obtain the amount of liquid on the sheet. Our results indicate that more than half of the liquid is lost from the sheet to other channels a few microseconds after the laser pulse—a timescale relevant for lithography application. A direct conclusion from this finding is that, in order to maximize amount of tin on the sheet, it is optimal that the second, successive laser follows the prepulse with the smallest possible time delay. To ensure that the tin target reaches a sufficient size in this short time, an energetic prepulse is needed to achieve a higher expansion rate of the droplet. In Chapter 3, we study the thickness and mass content of the sheet by irradiating it with a probe vaporization pulse. This probe laser pulse gradually removes liquid from the sheet, allowing us to access the sheet thickness profile at early times. The thickness profile, and from it the mass content on the sheet obtained by this vaporization pulse, agree well with the prediction from the model discussed in Chapter 2. Furthermore, with increasing time, the vaporization pulse will first remove the thin sheet, leaving features with larger thicknesses behind. In this way, we directly visualize the presence of the bounding rim and the center mass. In Chapter 4, we study the partitioning of the kinetic energy that is channeled into the radial deformation and propulsion along the laser direction. Based on both an extensive set of experimental results and radiation-hydrodynamic simulations performed using the RALEF-2D code, we investigate the effects of varying droplet diameter, beam size, and pulse energy on the energy partitioning as well as the ratio of characteristic speeds associated with these two orthogonal motions. The results show that the kinetic partitioning is solely determined by the width of the (Gaussian) pressure impulse resulting from the plasma at the droplet surface. In Chapter 5, we experimentally measure the speed of the tin debris generated by ligament breakup, and the temporal evolution of this speed throughout the sheet expansion process. We find that the upper bound of the fragment speed is the initial expansion speed of the sheet. Further analysis reveals a self-similar curve that characterizes the temporal evolution of the fragment speed. The robustness of this self-similar behavior is demonstrated by the extensive range of droplet sizes and pulse energies investigated in our experiments. We further explore the underlying physics of the observed self-similarity. Our results provide a powerful tool for predicting the instantaneous location and velocity of the fragments. With all the measurements performed and quantities provided by the previous Chapters, we finally discuss the global mass distribution among the target in Chapter 6. First, by combining the improved spatial resolution offered by our imaging system with machine learning capabilities, we are able to determine the instantaneous fragment diameters at the moment when they detach from the ligaments. These results, along with the tracking of the fragment number, provide the mass accumulated in fragments over time. Next, we determine the non-negligible amount of liquid contained by the ligaments and the rim by combining our experimental observations with an existing analytical model. We also discuss the amount of liquid tin in the center mass. Finally, we provide a global map of the mass distribution among these aforementioned channels: sheet, rim, fragments, ligaments, and the center mass. The sum of the liquid in these channels is shown to account for ≈90% of the total mass of the initial droplet. The still-missing fraction of mass is consistent with the mass fraction ablated by the laser pulse as indicated by our RALEF-2D simulations. 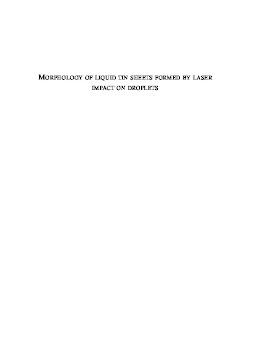